This restoration of a Vietnam era gun truck was completed the day prior to the 9th annual Warbirds Wings & Wheels. The response from attendees was incredible! This is the only known Viet Nam era restored Gun Truck west of the Rockies.

During the Vietnam Conflict, it was the mission of the US Army Transportation Corps to ferry supplies from the coastal ports of Qui Nhon and Cam Ranh Bay to inland bases located at Bong Son, An Khe, Pleiku, Da Lat, and Buon Ma Thuot. The logistical requirements of the MACV were huge, and 200-truck convoys were not uncommon. These formations were tempting targets for Viet Cong guerrilla groups, who often sprung ambushes in remote areas. The gun truck configuration was borne out of necessity to better improve the safety and security of such logistical operations during Viet Nam.

The M35 2½-ton cargo truck is a long-lived 2½-ton 6x6 cargo truck initially used by the United States Army and subsequently utilized by many nations around the world. Over time it evolved into a family of specialized vehicles. It would not only inherit the World War II GMC CCKW's famous "Deuce and a Half" nickname but forge its own legacy.

The M35 started as a 1949 REO Motor Car Company design for a 2½-ton 6x6 off-road truck. This original 6-wheel M34 version was quickly superseded by the 10-wheel M35 design. While the basic M35 cargo truck is rated to carry 5,000 pounds (2,300 kg) off-road or 10,000 pounds (4,500 kg) on roads, they have been known to haul twice as much as rated. Trucks in this weight class are considered medium duty by the military and Department of Transportation.

Special thanks to Bill Lander and Keith Dekker for heading up this restoration project. It turned out excellent!

How fast can you rebuild this gun truck? 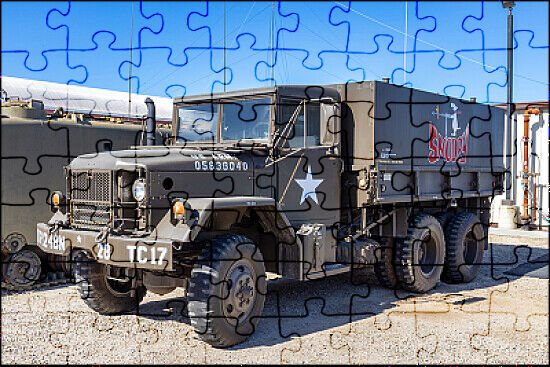