In November of 2012, the EWM Board accepted the donation of a 1940 Ford 4 door sedan from a family whose father owned the car. The vehicle had been brought to California from Oklahoma when they moved to the area many years ago. The condition of the vehicle, when donated, had seen many years of being baked under the hot California sun. The restoration crew soon took up the challenge to restore the vehicle to near original condition.

Both the US Army and the US Navy utilized the 1940 Ford Sedan Deluxe version although this particular model was more prevelant with the US Army.

Engines
Ford offered just two engines for this particular automobile lineup. A 136 cubic-inch in-line six-cylinder had a 2.6-inch bore and 3.2-inch stroke. The compression ratio was 6.6-to-1 developing 60 horsepower and 94 foot-pounds of torque.

Fortunately, our vehicle has the more popular flat-head 8 cylinder.

A high flat-topped hood dominated the front look of the 1940 model, as the grille spread out to reach the fenders to differentiate the Deluxe line and the headlights were pushed wider still. The standard Ford inherited the grille of the 1939 model with blackout on each side of a heavy chrome center; heavier headlight surrounds serve as another major differentiator from the 1939. 1940 was the last year of the 1937 design and its smaller V8 engine, with a straight-six engine to be reintroduced the following year. Sealed-beam headlights were one of the few major advances for 1940, while a hydraulic top was new on the convertible.

How fast can you rebuild this car? 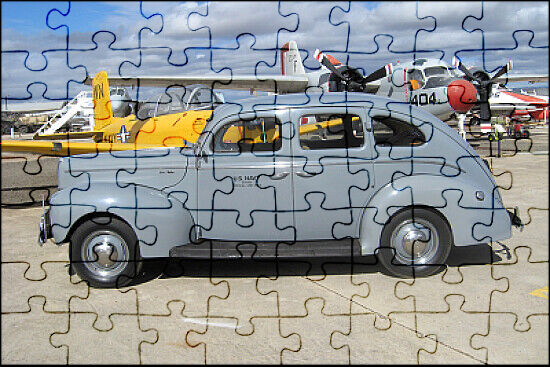