On 17 May 2003, our T-33 arrived on three flatbed trailers bearing a tail section, a wing section, and a fuselage. Those three pieces became became our "six-hour plane."

Early jet engines were slow to build up power and without a propeller, jet aircraft lacked the drag needed to slow down quickly. This took a lot of getting used to for pilots trained on propeller aircraft and there were a number of accidents involving early jet fighters.

Lockheed recognized the need for a trainer while creating the XP-80 jet fighter in 1943, but the Army Air Force showed little interest. However, the Air Force changed its mind in 1947 with the realization that jets would dominate the post-war world.

A longer, two-place version of the historic P-80 (F-80) Shooting Star, our nation's first operational jet fighter (and the first to score a victory in all-jet combat when one downed a MiG-15 early in the Korean War). Thank you, Lt. Russell Brown! Three feet more were added, plus a second seat and dual controls, to provide the Air Force with a trainer since there was nothing available in which to instruct pilots about the then-new jet technology of the late '40s. In Korea the T-33, nicknamed "Tee-Bird," was adapted as a well-armed attack-fighter, belying its scholarly "trainer" designation.

First flown in March 1948, T-33 has been used to train pilots not only in this country, but in Italy, Greece, Turkey, Belgium, France, the Netherlands, Denmark, Norway, and Portugal, and was built in volume under license in Canada. The T-33 is one of the world's best-known aircraft, having served with the air forces of more than 20 different nations over several decades. 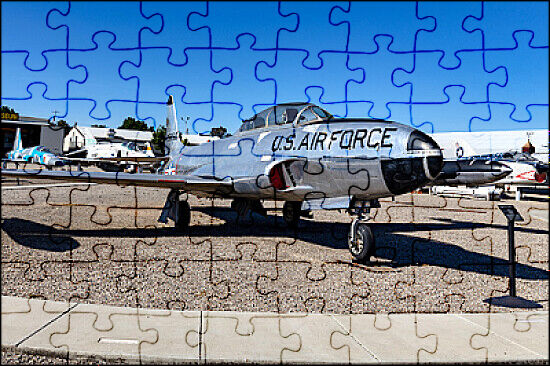