This F-16B didn't quite 'fly' into Estrella Warbirds Museuem, it was driven on a flatbed truck. One has to imagine what that looked like driving down the freeway, only to be passed in the left lane, by an F-16B! It was quite a sight to see! Note: Several of the images above show this aircraft in previous unit colors

The F-16 Fighting Falcon is a lightweight, compact fighter aircraft designed for air superiority performing a wide range of military missions ranging from air defense to air-to-ground strike missions. More than 4,000 F-16s have been or will be produced for more than 24 nations worldwide. The first F-16A achieved initial operational capability in 1979. As of 2004, more than 11 million flight hours have been logged by F16s from 20 air forces worldwide. The United States Air Force remains the world's largest operator for the type with more than 1,200 units in service of all models. The aircraft was replaced by the far more capable F-35A Joint Strike Fighter beginning in 2015 through 2025.

In air-to-air engagements the F-16 is highly maneuverable and in the air-to-surface role the aircraft has demonstrated the capability to accommodate any guided and unguided weapon such as laser guided bombs and a variety of air-to-surface missiles. It carries internally a 20mm M61A1 gun for close-in air-to-air engagements. Besides, the F-16A/B is able to carry the AIM-9 Sidewinder missile while the F-16C/D can be armed with the medium-range AIM-120 AMRAAM missile. To deliver precision guided munitions the Falcon can accommodate the LANTIRN targeting/navigation pod system, as well as the LITENING and the most recent Sniper XR. The targeting and navigation pods have provided day and night, all-weather strike capability to the F-16 aircraft fleet all along its service life.

The two-seat F-16B Fighting Falcon was intended for training but retaining combat capabilities. The second additional seat was achieved through fuel load reduction which also reduced the F-16B combat range.

The F-16B is a combat-capable, two-seat trainer version of the F-16A. The B model is essentially an A model with the second cockpit added in place of internal fuel cells.

The exterior dimensions of the two aircraft are the same with the exception of the second cockpit and longer canopy of the F-16B. The first flight was on Aug. 8, 1977, with production aircraft deliveries starting in 1978.

The B model was proposed as a "Wild Weasel" surface-to-air missile site attack aircraft but never proceeded past the demonstrator phase. The aircraft was also tested with the General Electric J79 jet engine in place of the more powerful and expensive Pratt & Whitney F100 engine used on the standard production aircraft. The F-16/79, intended for export, never entered quantity production in part because the users wanted the "real" aircraft (F100-powered) and not a lower performance substitute. 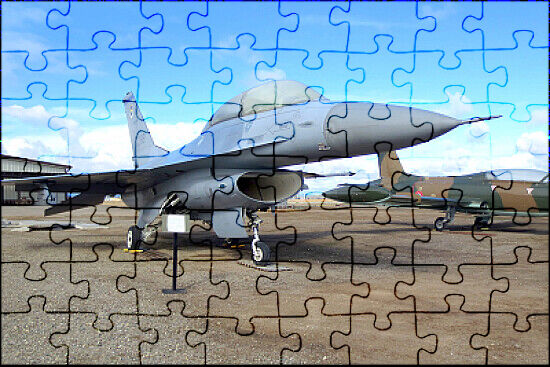